How a harness can save your life

Last week I shared a video of some Crazy Demolition Workers which showed workers standing on a building, and smashing the wall supporting them with a sledgehammer.

I commented that the video was not a one off, and that we often see work such as this being carried out without any form of safety precautions.  Thankfully this week, I'm able to show you an example of what happens when there are safety precautions in place and someone does fall.

In the video footage we see two workers standing on a scaffold tower while cutting a steel beam.   As the beam falls, it hits the tower, knocking it over.  Thankfully the men are using a fall protection system consisting of a harness and lanyard connected to an anchorage point so their fall is arrested.

This video does of course raise some questions.  Was the work really planned properly and a suitable risk assessment undertaken before the work was carried out?  Should the scaffold have been secured? Was there an effective rescue plan in place – judging by the way the colleagues ambled up to the workers at the end of the video, I suspect not.

Despite these questions, what the video does show us is just how effective fall protection can be when specified and used correctly. 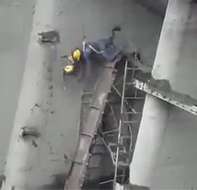